The purpose of the Chiefs RFC Discipline Policy is to ensure that all players, parents and coaches understand the expectations of behavior and conduct while on Chiefs time.  As a community based club, this discipline policy generally only covers offences that occur on Chiefs time.  However, if a serious incident occurs out of Chiefs RFC hours, and it is brought to the attention of the Chiefs RFC Board of Directors, any appropriate action, if any, can be taken by the Discipline Committee and/or the Board of Directors.

Any disciplinary incident will be recorded at the time of the incident, and the coach, parents/guardians and the Discipline Committee will receive an email detailing the incident.  The club strongly advises parents to discuss with their player the Code of Conduct signed in the hope of avoiding such action in the future.

Parents/Guardians of players registered with the Chiefs are required to electronically sign a Parent/Guardian Code of Conduct.  This code of conduct reflects the behavior expectations while their player is either at training or playing a game.

Disciplinary action will have a number of steps to encourage players to amend their behavior before sanctions are imposed.

The following process explains what actions will be taken by Coaches/Administrators/Disciplinary Committee if a player or parent/guardian breaks the Chiefs RFC Player Code of Conduct.

A Yellow Card will result in a player missing the remainder of the training/game they are at.  A meeting will be held immediately after training/game with the parent/guardian to discuss the behavior during the session.

A Red Card will result in the player being suspended from the rest of that training/game/tournament and the next  7 days of activities with the club, including training and/or games.  A meeting with the coach must be held within the 7 day suspension with the player, parents/guardians.  A player may not return to club activities until the meeting has been held (either in person or via phone)

A player will appear before the Discipline Committee if:

Actions which can be taken by the Discipline Committee

Any coach who violates this code of conduct is dealt with by the Rugby Illinois Competitions Committee.

Any Chiefs RFC player/coach/parent/guardian who believes a Chiefs RFC coach/administrator has violated the Rugby Illinois Coach/Administrator Code of Conduct should report it to the Chiefs RFC President who will forward the case to the Competitions Committee.

As a member of the Chiefs Rugby Football Club, I realize that my membership with the Chiefs, and the ability to travel with the club, is a privilege and not a right. As such, I acknowledge that I must conduct myself in accordance with this Code of Conduct and all other team rules. I promise that I will:

1. Show good character. Be honest, caring, trusting, considerate, unselfish, and a credit to myself, my family, my teammates, my coaches, and my club.

2. Respect myself, teammates, coaches, my club, officials, opponents, and the game.

4. Build and maintain a high level of fitness and game preparedness.

5. Give my best effort at all times.

7. Not use; possess; or distribute; tobacco, alcohol, illegal drugs, or performance enhancing substances banned by the United States Olympic Committee.

8. Not engage in any criminal conduct, including, but not limited to laws governing the possession, provision, and use of drugs and alcohol.

9. Not possess any type of weapon, including a firearm or knife of any kind, at any Chiefs’ function, including practices, meetings, matches, or tournaments.

The Chiefs Rugby Football Club is a not-for-profit club sustained by the efforts of volunteers who display an extraordinary amount of commitment and hard work, ensuring that our teams are a positive influence in the lives of our players. We also strive to provide a service to our community by providing a healthy outlet for our players, opportunities for the community to gather together, and endless hours of entertainment. The goal of our club is to provide a safe and productive environment that enables the players to learn how to play rugby correctly and apply the principles of Teamwork, Discipline, Dedication and Sportsmanship. We facilitate the development of Strength and Character in everyone that participates.

You are entrusting your child’s rugby development to the Chiefs RFC and staff members. In turn, we ask that you embrace our philosophy and dedicate yourself as fully to our methods as your child does to his or her training. Our commitment is to the best interest of every player, and from that commitment we have the following expectations of all parents, families and spectators whether they are new or returning to Chiefs RFC for the 2017-18 season.

1. I will encourage and support my child during their rugby journey

2. I will help to manage my child’s expectations and aspirations

3. I will promote and exemplify good sportsmanship

4. I will not coach from the sideline and will refrain from influencing the players’ decision making in any way.

5. I will accept that all playing time will not be even although the coach will strive to give each player quality field time

6. I will not disparage or undermine my child’s coach or teammates

7. I will not yell, ridicule or criticize my child or other players from either team

8. I understand that children are involved in organized sport for their enjoyment and not mine

9. I will not confront the coach during training sessions or immediately after games. I will wait 24 hours before

addressing the coach with my concerns

10. I will follow the club’s and coaches’ communication protocol

11. I will not engage in negative comments with or directed at opposing parents or the referee

12. I will cheer for my child and his/her team and will allow the coach to do his/her job of coaching

13. I will not interfere with or contradict any instructions given by the coach during training or games

15. I will not use foul language at any time at any club activities or around club members

16. I will not make racial, sexual or other discriminatory comments at any club activities or around club members

I understand that by signing this document, our family is agreeing to support and abide by this parent/legal guardian code of conduct agreement. Further, failure to comply with this agreement and the term outlined above may result in disciplinary action up to and including suspension or release from Chiefs RFC including forfeiture of player fees. 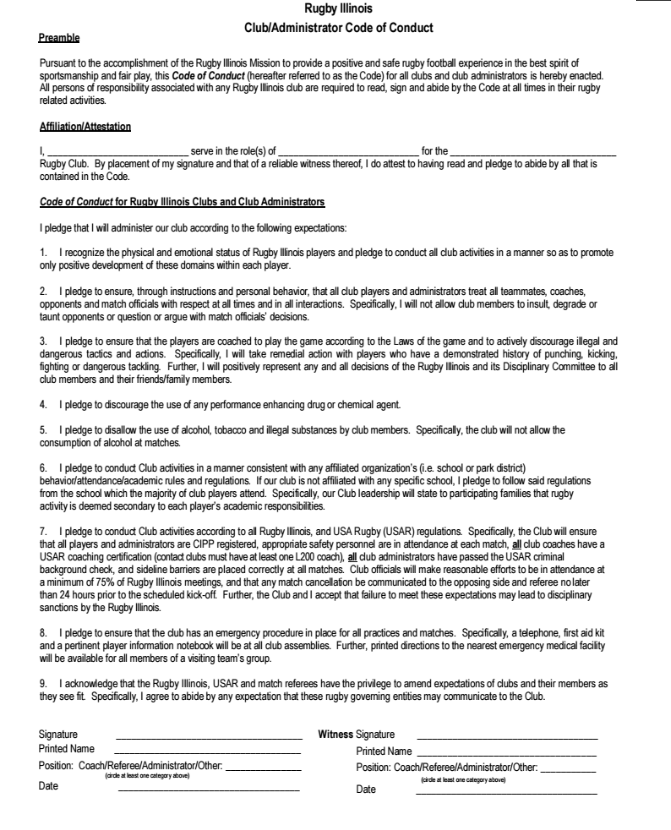